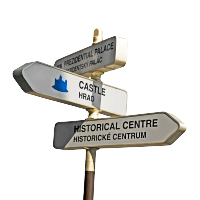 Bratislava Audio Tour will help you to orientate yourself to this city, its people and the culture.

Each audio track describes one place of interest in Bratislava.

The whole tour can be completed in about 4 hours using only your feet and your iPod or other MP3 players. In every track, you will hear info on how to get to the next place but for better orientation, we recommend you to also use the attached map.

Starting with the castle providing the superb panoramic view on the old and new part of the city and even to Austria, then going to a Gothic cathedral where coronations of Hungarian kings were held, old Opera House with the romantic mythological fountain in front, continuing to the Main Square, full of history guarded by the mysterious statue of a knight, then Primate’s Palace with the Mirror Hall where the famous Peace Treaty with Napoleon was signed and finally reaching the Tower gate and classical President’s Palace where famous composer Joseph Haydn used to have concerts.

Bratislava is situated in the foothills of the very small mountains adequately named the Small Carpathians sitting on both banks of the river Danube, which encompasses 370 square kilometers.

It is quite easy to get anywhere from Bratislava. Vienna is about 1 hour by train or car and the borders of Hungary and the Czech Republic are nearby.

The Bratislava airport, 10 min by car from the centre, is administered by the various, mainly low-cost airlines such as Ryanair making direct flights to most European capitals.

Another airport- Schwechat- The Vienna main airport- which is used also for transatlantic flights is only about 40 km away from Bratislava with frequent bus connections to Bratislava.

Bratislava has about half a million inhabitants. It is the capital of Slovak Republic, one of the youngest states in Europe and a member of the European Union, OECD and NATO.

In the mid 19th century, the famous Danish writer Hans Christian Andersen described this city as a fairytale. Nowadays Bratislava, the capital of the Slovak republic evokes this atmosphere more than ever before.

Its cosy nice town centre- where most landmarks are within walking distance- is still not overrun by tourists so you can feel the local atmosphere everywhere around you.

Everything important about these and other places you will hear in this Audio Tour of Bratislava. 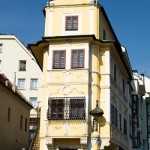 From the castle, you will probably use the stairs towards to city center and pass the oldest castle gate- Sigismond Gate in the Gothic style to get to this audio point. It is on the way down next to the nice narrow building currently housing the Museum of Clocks- House at the Good Shepherd. 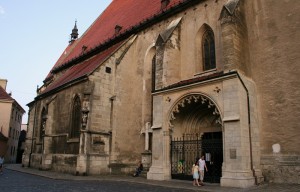 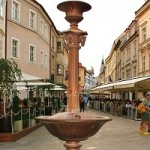 On this audio point, you are standing at the junction of streets Michalska, Laurinska and Panska, next to the simple iron fountain. Its name is the Bird fountain because a lot of birds used to come and drink from the upper water reservoir. In fact, it is not a masterpiece nor historic monument but we can use it as a good stop for the interesting buildings in its surroundings.

From the cathedral, you will go down the stairs and turn left to the Panska street. A first junction is our audio point.

In this audio point you will learn: 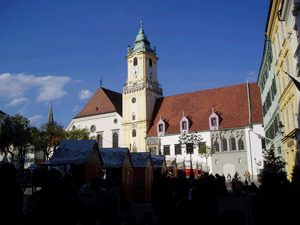 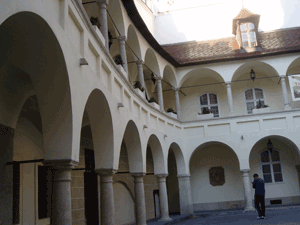 Old Town Hall is actually a complex of more buildings connected together in the 15th and later centuries. Thanks to that, you can see on one place, nice examples of almost all architectural styles used in Bratislava centre over the centuries: A gothic part with the accented vertical lines, renaissance quadratic windows as well as a baroque tower with plastering façade. 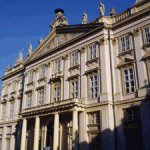 This audio track is covering the Primatial square (Primacialne namestie). It is named after the Primate’s Palace which dominates this square. On the opposite site of the square, there is a new Town Hall. Thanks to that, there is a free wi-fi Internet access on the whole square so if you have a laptop or any Wi-Fi enabled device with you, you can sit and surf for a while.