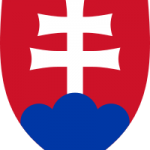 I was inspired to write this blog post during my recent walk through the Bratislava castle hill. I heard one tour guide explaining to the big group of German tourists which symbols are represented on the Slovak national coat of arms. He got it wrong. But he was not alone, even the almighty Wikipedia repeats the same error on their pages. Where is the truth then?

The three mountains/hills represent the three “little mountains” (actually mountain ranges) Tatra, Matra and Fatra (the middle one in present-day Hungary) which symbolized the northern mountainous part of the Kingdom of Hungary. According to Istvan Werboczy’s “Tripartitum” from 16th century, the heaps represent the mountains in this order.

And here comes the truth about the three hills. We know that it was firstly used in early 14th century. What do they represent? That has not been discovered yet. But we know for sure that Tatra-Matra-Fatra theory originates from 16th and 17th century and has no historical relevancy. It was probably made up when the double cross with hills were part of the Hungarian coat of arms.

Any other idea what could the Slovak “logo” represent? A boat in the troubled sea?

If you want to hear more about the Slovak national flag and anthem, listen to the second audio track located at the Castle Hill.